“Only boring people get bored.”

This was my mother’s retort every time I told her I was bored. Like, so bored. Like “roll your eyes and sigh and flop down on your bed in exasperation” bored. When toys, TV, and friends fail you, it feels like the end of the world. Most of us have not experienced that uncomfortable feeling of boredom in our adult lives very often. There has always been something to do, something new to see (even if it is in the small, rectangular screen of our smartphone).

In March 2020, the COVID-19 pandemic shut down America’s hustle and bustle culture. While frontline workers battled to keep grocery store shelves stocked and healthcare workers fought to save lives, the rest of us hunkered down in our homes with our schedules wiped clean.

We binge-watched. We cleaned out closets. Some of us did home workouts. Some of us did more napping. It felt novel for a few weeks to be free from our routines. But then—we got bored. Like, so bored. We wanted to do everything we used to do. We did not want to make another opens in a new windowsourdough starter. We could not binge-watch another second of TV. The novelty had worn off and nothing sounded fun anymore. In “ opens in a new windowLearning from Pandemic Boredom,” James Danckert and John Eastwood put it this way: “Boredom occurs when you can’t want to do anything that is doable.”

Ian Bogost writes about boredom’s potential in Play Anything: The Pleasure of Limits, the Uses of Boredom, and the Secret of Games (2016). He argues that boredom is not the end of the world that our inner-child thinks it is, but is instead fertile ground for discovery: “Boredom is a sure sign that we have tousled the hair of wonder and joy. Boredom sends up a flare: meaning exists here, boredom beckons, but stranded meaning. Meaning that requires rescue.” 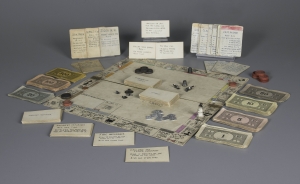 When we are bored, we can play, create, invent, and rescue that meaning—if we resist the urge to quell our boredom quickly by scrolling through social media or other distractions. Writers such as Neil Gaiman swear that boredom is opens in a new windowkey to the creative process: “You have to let yourself get so bored that your mind has nothing better to do than tell itself a story.” Agatha Christie started writing stories to entertain herself; J.K. Rowling thought up Harry Potter and his magical world while stuck on a train.

Lester B. McAllister was 14 years old in 1935. He had played Monopoly but could not afford his own game, so he made his own copy with property names of towns and places familiar to him. He wrote out all the Chance and Community Chest cards with humorous penalties such as “Pay $25 for unlawful parking and talking back to the officer.ʺ His family used small charms and metal tokens as playing pieces. Wooden checkers served as hotels and metal tax tokens as houses. This game became a well-loved family heirloom and remains a testament to the creativity and humor of its maker, a young man who made the best of hard financial times. 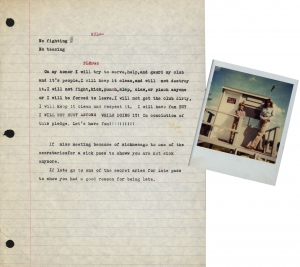 Nearly 50 years later, a young Stephen Desroches created his own Club to meet in his newly built Clubhouse—complete with rules, membership applications, and a sick leave policy. The opens in a new windowStephen K. Desroches papers at the Brian Sutton-Smith Library and Archives of Play documents Stephen’s ability to make play out of anything, even research papers.

Twenty years after that, a group of cousins salvaged another boring family Thanksgiving dinner by inventing a game called “Beach Scrubby” that involved badminton rackets, a sponge from the boathouse, a rock, a rope, and cutthroat competition. Although it is not as dignified as Lester McAllister’s handmade Monopoly board, the legend of Beach Scrubby has become a part of my family’s lore.

More days of boredom appear to be on the horizon. Danckert and Eastwood would reassure us that “the distress of boredom invites us to take stock of our thoughts, desires, and feelings, determine what matters to us, engage the world on our terms, and in so doing, not be bored.”

I hope that you get very bored, and that wonderful art, literature, games, and memories come out of it.