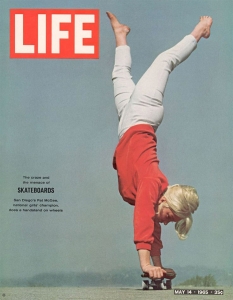 In 1959, Roller Derby Skate Company released its Roller Derby Skateboard, the first mass-produced skateboard to hit the marketplace. Skateboarders found it easy to recreate the design at home—they used cut-out sheets of plywood and attached repurposed wheels. Hermosa, California saw the first skateboarding contest in 1963 and the sport quickly emerged as a popular activity. Stories of the origins of skateboarding often center around teenage boys in Southern California, while many of the female pioneers are overlooked. This is my chance to help rebalance that account.

Patti McGee, a teenager living in Southern California, gained a new sense of freedom when she discovered skateboarding in the early 1960s. McGee started to skate with a Bunbuster board by George Cooley. A local sporting goods store saw her skating and asked McGee to give away a skateboard at a drawing every evening. One night the kid scheduled to give a skateboarding demonstration for the store failed to show, so McGee took his spot and gave a performance for 1,500 onlookers, proving to all of them that skateboarding skills weren’t limited to one gender. A few years later, at the age of 19, McGee became the first female skateboard champion at the 1965 Women’s National Skateboard Championship. She soon became the first professional female skater and the demo girl for HOBIE Skateboards. During her tour with HOBIE, McGee appeared on The Tonight Show Starring Johnny Carson. Her maneuvers included a kick-turn, a 360, and, most notably, walking board maneuvers. The skateboards of the time were thin, and the wheels were made of metal and had no grip, which made these tricks especially radical. That same year, McGee was featured on the cover of the May issue of Life Magazine and Skateboarder Magazine. While McGee was a skateboarding novelty, her involvement demonstrated that it was a path of opposition for gender expectations. 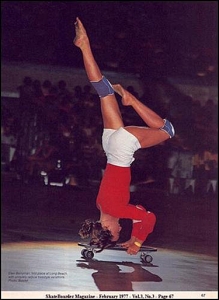 In the 1960s and 1970s, women skateboarders excelled at freestyle. They often performed flat ground tricks like 360s and weaving through downhill obstacles. Ellen Berryman, a teenager living in Encinitas, California, got her start skateboarding in a nearby housing development. The new development had wide, smooth streets that proved ideal for skateboarding. Berryman used the combination of urethane wheels on her board and her gymnastics background to become a pioneer of the freestyle movement. Her signature tricks involved meticulous choreography and handstand variations including a “spider” (a handstand with her feet resting on her head in a v-formation). Berryman took first place in the 1976 Women’s Freestyle Championship and the 1977 California Free Former World Professional Skateboard Championship. Throughout the 1970s, skateboarding provided an opportunity for female skateboarders to take physical as well as symbolic risks.

In the 1970s, skateboard sessions in empty pools proved popular. Boys trespassed to access the pools and became territorial of the space while skating. Boys rarely included girls, because they assumed that girls couldn’t handle the aggressive scene, master the space, or defend themselves should the police arrive. In the mid-1970s, Peggy Oki, a surfer and student at Santa Monica College, joined the original Zephyr Skateboard Team (Z-boys) from the seaside slum of West Los Angeles (Dogtown). She was the only female on the team. The Z-boys made their debut at the 1975 Del Mar Nationals. The team showcased an aggressive attitude and a unique style. Oki’s skateboarding style was raw and gritty, which some women found disconcerting, yet she was the only member of the team to take home a first-place trophy. She actively participated in the subculture and challenged the idea of who should be considered an authentic skateboarder. 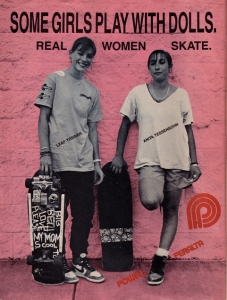 Despite the progress being made in the sport, the young women who were presented as desirable in skateboarding media often emphasized their heterosexual femininity through clothing and appearance. As a teenager growing-up in a predominantly upper middle-class suburb, I don’t recall more than a few skateboarding girls. I do remember wearing the clothes related to the subculture—oversized jeans, baby tees, my dad’s old flannels, and Vans (the depiction of Tai Fraser from Clueless was common for teen girls in the 1990s). I hung out with boys who skateboarded, but I remember only one of them ever invited me to skateboard.

McGee, Berryman, and Oki served as role models for girls interested in non-traditional forms of play and competition. However, as an adult, I don’t consider play a gendered concept. From my perspective, if you’re interested in it, it’s yours to play around with. I appreciate skateboarder Jeff Howe’s sentiment about skateboarding: “It is a lifestyle of abdication, a silent vote for freedom without fame, glory without glamor, entertainment without consumption.” With the skateboard included in The Strong’s opens in a new windowNational Toy Hall of Fame, we’re always looking for more skateboarding materials to help round out the story we tell. Got skateboarding gear or tales you’d like to share with us? Drop us a line at collections@museumofplay.orgcreate new email and help preserve skateboarding history.