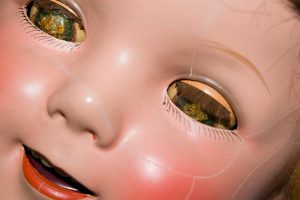 When The Strong museum recently acquired a Shirley Temple doll from the 1930s, it went to the museum’s doll conservator Darlene Gengelbach for treatment. These dolls have sleep eyes that open and close with metal rockers. The rocker is a spindle attached to the inside of the doll’s head with a small weight attached to a metal plate. Each painted metal eye has a celluloid pupil and iris.

More significantly, the celluloid centers of Shirley Temple’s eyes appeared “crazed,” a term conservators use to describe fine cracking throughout the early plastic. In the early 20th century, manufacturers used celluloid to make knife handles, fountain pens, and phonograph records. It imitated ivory, wood, tortoiseshell, or bone. When celluloid deteriorates, it can appear cloudy, cracked, or shattered. After a certain point in time, the celluloid’s inherent vice causes it to catastrophically fail, crumbling or shattering into small glass-like chips. The Shirley Temple doll we acquired had celluloid eyes that were in the late stages of deterioration. 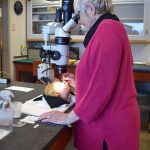 Our initial attempt at treatment resulted in a small chip coming loose and the eye continued to become unstable chemically. Darlene knew we had to do something to try to save the doll’s eyes, but what? I researched the chemical properties of celluloid and devised two new conservation treatment procedures to test. One method would add a protective coating over the surface of eyes that hadn’t yet fragmented into chips. 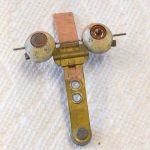 I chose a conservation adhesive that was reversible, would match the gloss, and would not yellow over time. We tested our technique on a celluloid eye that had been removed from Darlene’s personal collection of 1930s dolls. To our delight, the coating changed the eye from cloudy to clear and glossy.

For severe cases such as the Shirley Temple doll’s eyes, Darlene and I determined that we would attempt to fuse the loose chips of celluloid back together with solvent-welding. In this procedure, Darlene and I tentatively placed a drop of solvent on the eye. Watching under the microscope we waited to see if the cracked pieces of celluloid would fuse together. As the solvent dried, we could see the celluloid soften and join along the crack. After letting our test area dry, we could verify a positive result in Shirley Temple’s eyes. It was a success! The eyes were not like-new, but they were intact. 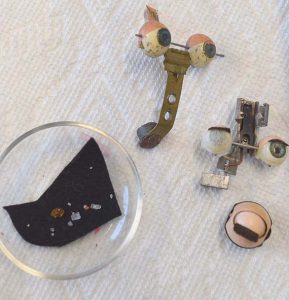 After treating Shirley Temple, Darlene and I knew that we should apply our new technique to other dolls from the same era that were vulnerable to the same type of celluloid deterioration in their eyes. With more than 15,000 dolls, The Strong museum’s extensive collection includes hundreds of other examples from the 1930s. We searched through the collection for dolls with celluloid eyes. Today, Darlene continues to treat dolls with celluloid eyes in the hope that our conservation efforts can slow deterioration and prevent irreversible loss. I am keeping a list of dolls we have treated, making it possible to check on how effective our conservation work is after a few years in climate-controlled storage. 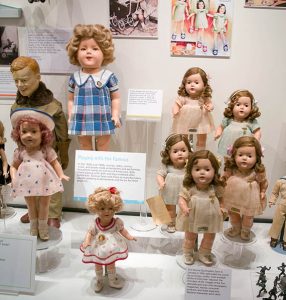 Curious to see examples of our treatment success story for yourself? You can find examples our conservation work in the celluloid eyes of the Dionne Quintuplets, two Shirley Temple dolls, and Jane Withers dolls on display in the 1930s timeline section of the Play Pals exhibit on the museum’s second floor. One thing you won’t see is a label explaining how the Shirley Temple doll’s eyes became “creepy” as a result of the plastic deterioration. Now that her eyes have been treated, Shirley’s eyes no longer look like something out of a horror film and I hope that they’ll remain stable and in one piece for decades to come.