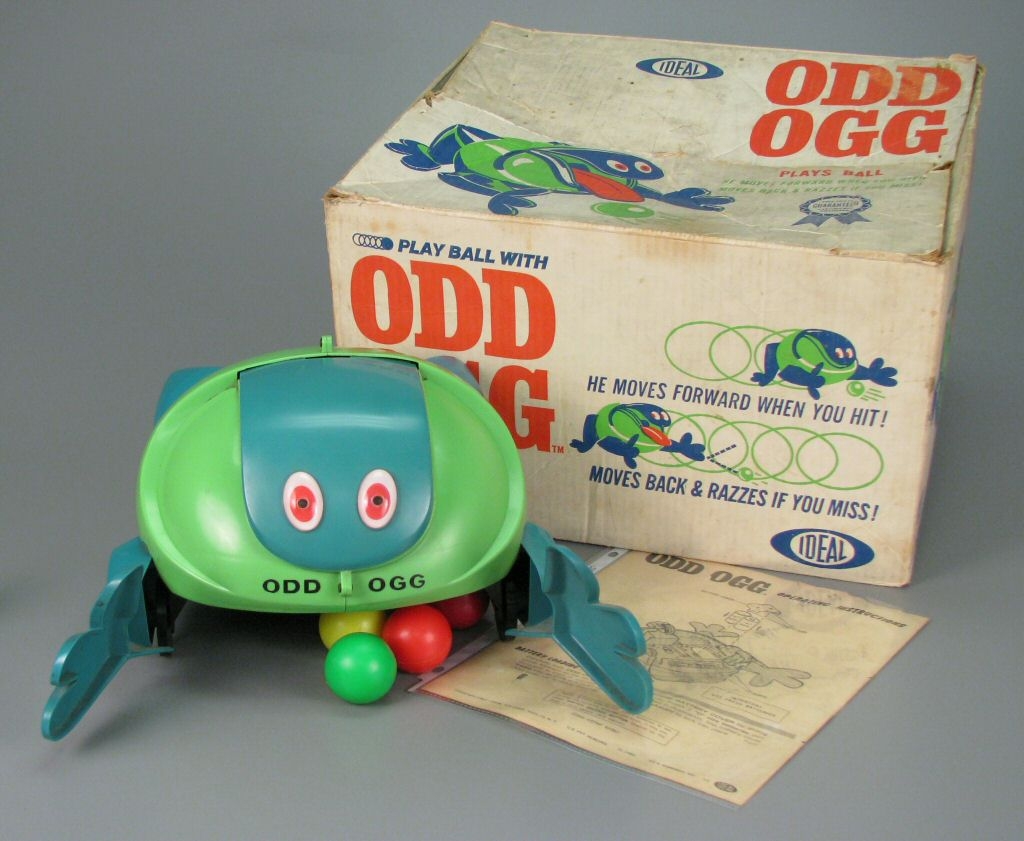 opens IMAGE file What’s that scuttling across the floor? A horseshoe crab? A Roomba vacuum cleaner? No, it’s Odd Ogg, a nifty interactive toy from 1962. If you’re feeling formal, you might want to call him Mr. Ogg, since that’s how the folks at Ideal referred to him when the company introduced the rolling green plastic toy with his beady pink eyes and gaping mouth. While Odd Ogg wouldn’t win any beauty pageants, his interactive responses (powered by two D batteries) were pretty impressive for his time.

So how does he work? Rolling one of the set’s five balls directly under Odd Ogg’s eyes trips a level that triggers him to move toward you while emitting a happy-frog croak. If your aim isn’t quite centered, he scurries away, opening his mouth to issue an indignant raspberry. If your aim is so accurate that Odd Ogg comes to you before you roll all the balls, you win! Or, you could start a competition by challenging friends to move Odd Ogg forward using the fewest number of balls.

Compared to today’s interactive toys with their giggles, songs, and eerily lifelike movements, Odd Ogg’s simple motions and sounds seem charmingly quaint. But, back in the early 1960s, Odd Ogg was appealingly new. Many adults of today remember playing with the floor figure as kids and readily recall the catchy TV jingle: “Odd Ogg, Odd Ogg, Half turtle and half frog.”

Some—including a writer for USA Today—admit that his Odd Ogg terrified him. Others remember Ogg as their all-time favorite toy. How could such a simple toy generate such strong reactions? Unlike many toys of today, Ogg had no backstory, no TV show or movie to give him recognition and personality. He just appeared in a home, usually on Christmas morning, and was ready to play. Ogg had no wind-up key, no switch to turn on. You just rolled a ball at him, and he MOVED. Because Ogg’s batteries, gears, and moving parts were hidden, he appeared to glide toward you as if by magic. And that, oddly enough, was the secret to his appeal.

If you remember Odd Ogg, or only wish you did, join our Odd Ogg blog. Add a comment and let me know if you loved Odd Ogg, found him scary, or just used him to startle the cat.